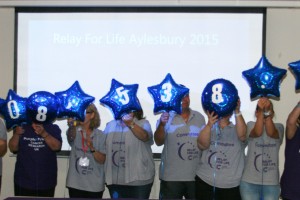 The 24-hour Relay, held in July, was the largest ever in the town with 599 Relayers, including 222 children and 58 cancer survivors in 28 teams, keeping at least one team member on the walking track at Aylesbury Rugby Club throughout the event – day and night.

The 2015 target was £95,000, but at the ‘Big Reveal’ event on Wednesday September 9th, the final total was unveiled to members of each team.

Chair of Relay for Life Aylesbury Paula Kirby said: “We continue to be amazed at the dedication and enthusiasm our teams put in to fundraising each year and are absolutely staggered by this year’s total. Huge thanks must go to the Relay teams, but also to all those who supported their fundraising events throughout the year, and to those who came to Relay itself, helping us to raise money which will fund research into beating cancer sooner.”

A new Relay initiative in 2015 was Purple Friday which saw around 50 schools and business in and around Aylesbury wearing purple clothes and paying for the privilege. There was also a collection in Aylesbury town centre and altogether Purple Friday activities raised £7,184.87

Paula Kirby said: “Purple Friday was an incredible success and we already have schools and companies vowing to take part next year. Many individuals and organisations want to be involved in Relay but can’t form a full team so dressing up for the day in purple, the colour which honours our cancer survivors, is something everyone can do.”

The 2015 Relay for Life Aylesbury was particularly poignant as the event’s founder Paula Watson, died in March, but her life and achievements were celebrated at Relay with a themed lap in her honour.

All money raised by Relay for Life Aylesbury helps fund cancer research and examples of what this year’s total could fund include:

“Relay for Life Aylesbury is such an important event for Cancer Research UK, raising vital funds and awareness to help beat cancer sooner. Our ambition is to get to three in four people surviving cancer in the next 20 years and we can’t do this without the support of fundraising events like Relay for Life Aylesbury. A massive heartfelt thank you to the Committee and all the teams for putting on another fantastic event this year.”

Teams will be able to sign up for the 2016 event in November, but can contact the Relay for Life Aylesbury Committee in advance of that date to register their interest and be kept up to date with Relay news and activities which run throughout the year. See our contact page for more details.